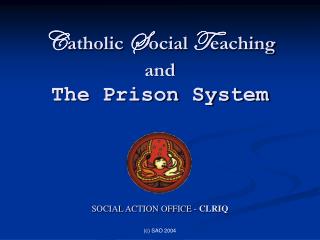 An Introduction to The Irish Prison System - . based on the findings of the jesuit centre for faith and justice report

The Crystal Prison - . by: robin jarvis. about the book. this action-packed fantasy thriller is about some mice who,

Marks of the Church - . the church is catholic. catholic?. catholic comes from the greek word katholikos , universal

Social action evaluation - . by francesca shaw. effects of globalization in henley town. what are you thoughts?. we first

Prison and the Aging Population a social care perspective - 2. the prison population is aging . 85,600 people are in