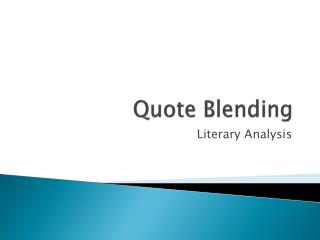 Quote Blending. Literary Analysis. The Basics. Always integrate quotations into your text. NEVER just “drop” a quotation in your writing! In other words, don’t let a piece of textual evidence stand alone as its own sentence (unless it’s multiple sentences long).

Embedding Quotes - . what does it all mean?. to embed or integrate a quote means to blend it into an original sentence.

Quote - . “know how to listen and you will profit even from those who talk badly.” --plutarch. active listening. most

TLQ for Quote Integration - . building fluidity within a paragraph. tlq. transition: use words from your blue book for

Quotation Integration - . mixing your words with words from the text. adding evidence to your essay. quotes need to

QUOTE - . another acronym… to help you answer essay questions!. “q”: question. ask, “what is the direction word

Quote Blends - . how to integrate quotes into your sentences. avoid the following. we know shakespeare’s birthday in

Notes #6 - Quote blending - . 2 methods for blending quotes into a paragraph:. blend the quote as if it is a natural part

Blending Quotations - . rules and recommendations. purpose. quotes are used as evidence to support ideas in your writing.

Quote Blending - . blending. when writing a response to any literary text, the writer needs support to lend credence to

Blending Quotations - . rules and recommendations. purpose. quotes are used as evidence to support ideas in your writing.