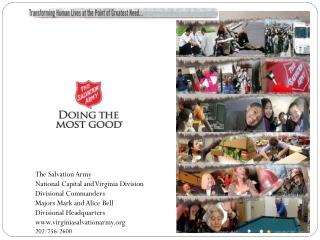 The Salvation Army National Capital and Virginia Division Divisional Commanders Majors Mark and Alice Bell Divisional Headquarters www.virginiasalvationarmy.org 202-756-2600. DID YOU KNOW…. …The Salvation Army is a member of the Evangelical Council for Financial Accountability .

ARTICLES OF FAITH - . national baptist convention, usa, inc. articles of faith. the scriptures the true god the fall of

Salvation Is From God The Book of Joel - . joel 2:11. the lord utters his voice before his army, for his camp is

Division of Undergraduate Education (DUE) - . “how to write a successful nsf grant” nists september 21, 2010 eun-woo

Calvinism vs. Arminianism - . two seemingly conflicting views of salvation. both are correct and proven through

ARMY VALUES - . “a man (sic) of character in peace is a man of courage in war. character is a habit. the daily choice