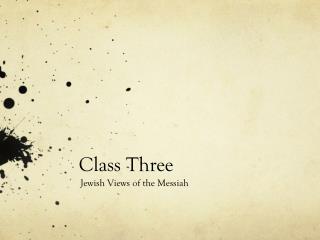 Class Three. Jewish Views of the Messiah. RECAP. 1 st Temple 2 nd Temple Maccabean Revolt. Setting the Stage. People assumed, in large part to the rise of Christianity, that there was ONE concept of a messiah being developed and considered until the arrival of Jesus of Nazareth.

Health Class PPT - . what are minerals that become electrically charged when in solution?. a rehydration. b mega