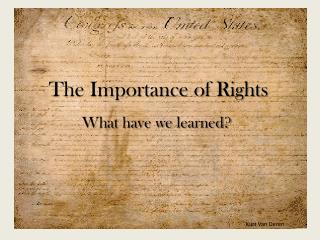 The Importance of Rights The Importance of Rights. What have we learned?. Kurt Van Deren. The first ten amendments to the Constitution are known as the Bill of Rights. The Bill of Rights was introduced in the first United States Congress in 1789 by James Madison.

The Importance of Rights