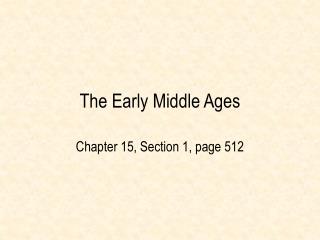 The Early Middle Ages. Chapter 15, Section 1, page 512. The Geography of Europe – page 512. Europe is a continent. a peninsula made up of smaller peninsulas most of Europe lies within 300 miles of the sea rivers – Rhine, Danube, Vistula, Volga, Seine, etc.