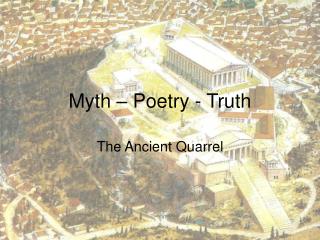 Truth or Dogma? - . an overview of the hydroplate theory dr. walt brown www.creationscience.com. truth or dogma?.

jcf - Www.jcf.org. the hero with 1,000 faces the masks of god the power of myth the historical atlas of world mythology

What is TRUTH? - . truth. that which has fidelity to the original. what is fidelity?. fidelity. the same as or

Grasping God’s Word - . old testament—poetry chapter 20. poetry in the bible. “poetry is the language of the

The Myth of Core Stability - . prof. eyal lederman do phd. the beliefs. that certain muscles are more important for

Teaching &amp; Performing Poetry - Professional development activity for “enhancing the interface between the