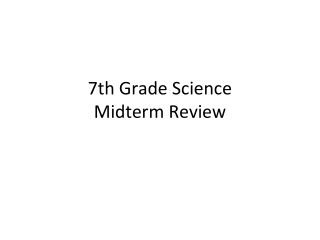 7th Grade Science Midterm Review. What is science?. Science is the study of the natural world. Science is divided up into three areas: Biology/Life science Geology/Earth science Physics/Physical science. What is empirical evidence?. Midterm Review Chemistry Level 2 - . chapter 1. what is chemistry? the field of science that studies the composition and

Second Grade Review Refrigerator Cards Investigating Science Safely - . use the word bank to tell what each lab tool is.

Earth Science Midterm Exam Review - . note : you do not need to study the challenge questions for the exam. moon

Midterm Review Family Sociology - . midterm exam. the midterm exam will be on blackboard midterm will be listed under