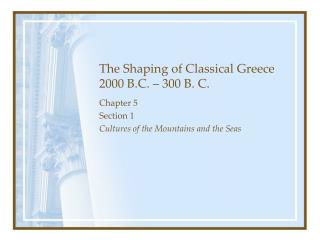 The Shaping of Classical Greece 2000 B.C. â€“ 300 B. C. Chapter 5 Section 1 Cultures of the Mountains and the Seas. Geography Shapes Greek Life. Three seas: Ionian, Aegean, and Mediterranean Linked parts of Greece together Connected Greece to other societies Ch. 9 - . greece. up to this point we have learned the first civilizations. formed near rivers. the people depended on

SHAPING A NEW NATION - . 9. feudalism is important to the development of constitutional government because it .

Ancient Greece Grade 7 - . by sabrina kilbourne and amy warner. introduction. this unit will introduce students to the

Write 5 inferences about how the geography of Greece would affect the people ‘s lives that lived here. Finish Greece