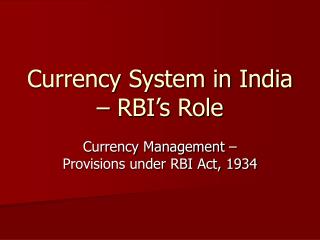 Currency System in India – RBI’s Role. Currency Management – Provisions under RBI Act, 1934. Section 22 of RBI Act. In terms of Section 22 of RBI is the sole authority for issue of currency in India including one rupee coins/notes.

The United Kingdom &amp; the EU (the Single Currency) - . introduction a) why did not the uk join the single

The Caste System of India - 7.6 compare and contrast ancient and modern india’s social structure and the role of

Basic Business Applications - . currency and rates of exchange. each country has its own system of coinage and this is

ASHA INDIA - . the crisis of the current education system. failure to fulfill any reasonable role assigned to education.