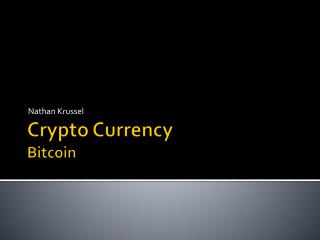 Money can't buy happiness but Bitcoin can! - Bitcoin being the most celebrated cryptocurrency has an added feature in it. The Journey of Cryptocurrency - Blockchain and cryptocurrency have traveled an uncertain path to worldwide popularity. Deciphering Cryptocurrencies & Bitcoins - The idea of a [cryptocoin], named bitcoin, the present day pioneer of You Need to Know What is Cryptocurrency? - Before going to buy and use cryptocurrency for your transaction, you need to 5 Amazing Benefits of Cryptocurrency - Http://blockgeeks.com/5-benefits-cryptocurrency/ do you want to become your

Bitcoin The Future of Currency - . “there is no way to value bitcoin, which means there is nothing constraining its

What is Bitcoin? - . a worldwide digital currency that is decentralized and not controlled by any government or

Is Bitcoin really a currency? - . david yermack nyu stern school of business november 22, 2013. what is bitcoin?. a