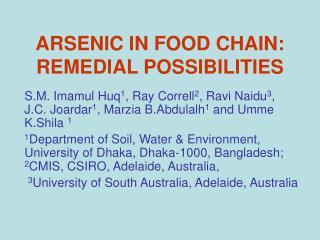 Applications of Biotechnology: Phytoremediation - In this section we will look at how the tools of biotechnology can be

Marzia Cescon - The development of system identification and its relations to biological and biomedical systems: the ifac

WELCOME TO THE ARSENIC LEVEL 1 ONLINE TRAINING COURSE - . lesson 2. arsenic is a byproduct of some agricultural and

Arsenic - . albertus magnus (1193-1280), a german philosopher and theologian, was the first to state that arsenic has a