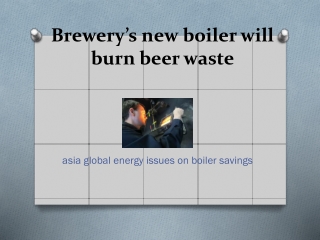 The Juneau-based beer maker has installed a unique boiler system in order to cut its fuel costs. It purchased a $1.8 million furnace that burns the company’s spent grain – the waste accumulated from the brewing process – into steam that powers the majority of the brewery’s operations. Company officials now joke they are now serving “beer-powered beer.” What to do with spent grain was seemingly solved decades ago by breweries operating in the Lower 48. Most send the used grain, a good source of protein, to nearby farms and ranches to be used as animal feed. But there were only 37 farms in southeast Alaska and 680 in the entire state as of 2011, and the problem of what to do with the excess spent grain – made up of the residual malt and barley – became more problematic after the brewery expanded in 1995. The Cost of Beer - . history. beer was first created in 7000 bc the first beer recipe found was from about 3000 bc women

The Beer Game - . simulates the flow of beer through a simple supply chain—retailer, wholesaler, distributor,

Making Good Beer at Home - . history of beer. one of the oldest beverages, dated to 6 th century bc the oldest still

Exercise I - . dirk hollnack. geo risks research munich re. workshop example - brewery in the us an american brewery

Boiler Maintenance - . how much do you do?. what is a boiler?. a boiler is a vessel that is is under pressure and is

The Best 5 Boiler Maintenance Tips - Winter is just around the corner and you must be planning to turn your boiler on.

Looking for the Best Boiler Finance Plan? Know About Finance Boiler in Newcastle - Buying a new boiler is really a big

Never Burn Waste PVC for Sake of Environment! - When you burn anything, micro-pollutants and acidic gases and ash are

How beer fob can save your ounces of beer? - In beer bars too much amount of beer is a waste and this reason cause a