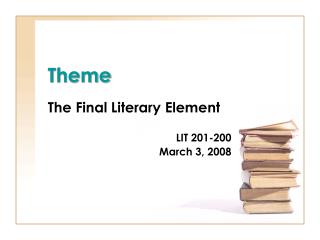 Theme. The Final Literary Element LIT 201-200 March 3, 2008. Definitions of THEME. General idea or insight the entire story reveals An abstract claim, or doctrine, whether implicit to asserted, which an imaginative work is designed to incorporate and make persuasive to the reader

The Theme - . shakespeare toys with the idea that fate or destiny is a supernatural power predetermining the path of