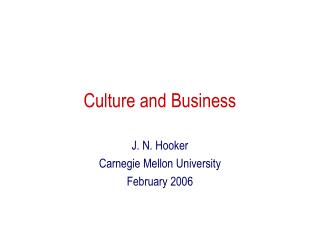 Culture and Business J. N. Hooker Carnegie Mellon University February 2006 A Popular View of Culture Culture is all about food, language, dress, customs, holidays, etc. What if all Chinese ate Sauerbraten and Spätzle rather than jiăo zi and bāo zi? It would be the same culture!!

Chapter 2 and Readings Culture in Business and IT - . learning objectives. define culture and explain its significance

Cultures in Business - . by lucy and yee. latina. by lucy. latina entrepreneurs: an economic force in the

Business culture- China vs US - . presentation outline foundation of us ethics- basic discussion comparison of business

Culture in busin ess - . what is culture? national cultures and subcultures components of culture frameworks for studying

Shaping Culture and Values - . functions of culture in business. culture provides a sense of identity to members and