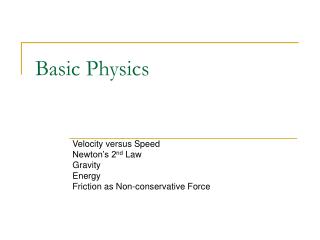 Basic Physics of Ultrasound - . what is ultrasound?. ultrasound or ultrasonography is a medical imaging technique that

Welcome to Regents Physics! - . mrs. patterson course introduction. what is physics? physics is the study of the physical

Basic Physics, Part II - . work, energy, and power. energy: the capacity to do work. this notion makes sense even in a

The Physics of Santa Claus - . some thoughts on the question of santa…. this is science. why santa?. santa is a

Lectures on the Basic Physics of Semiconductors and Photonic Crystals - . references 1. introduction to semiconductor

Welcome to Physics 100 ! Basic Concepts of Physics - Instructor: neepa maitra. based on the book by paul g. hewitt:.

Basic fMRI Physics - . in bold fmri, we are measuring: the inhomogeneities introduced into the magnetic field of the

Basic MATLAB Programming Course - . what we will learn in this session. the basic matlab interface. basic commands.