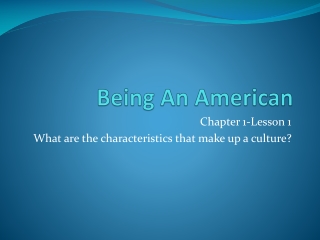 Being An American. Chapter 1-Lesson 1 What are the characteristics that make up a culture?. A Diverse Population. Immigrants- people who move permanently to a new country. Traditions (Cake, Pinata , Parades, Fireworks) 13% of all Americans were born in another country Chapter 1 Lesson 1: Being an American - . what are some traditions that your family practices? do you know what country(

Being An Ally - . effectively working with gay, lesbian, bisexual or transgender students presented by todd wolfe at the

Being an Orphan - . p. 25 p.27. examining beauty in our society and the victorian age. using magazines containing

Being an Assistant - . by natasha bitsui. overview. this internship was being an assistant for dr. wildcat made copies

Being an Acolyte - . why do we have acolytes?. acolytes bring… celebration reverence anticipation to the service by...

Being an employer - . overview. what is an employer? rights and responsibilities of employers reasons for keeping records

Being an employer - . what is an employer?. a person or firm who pays people to do work for them. rights of an employer

Being an Overcomer - . the upper room fellowship october 6, 2019. 4 questions to consider. what is an overcomer according

Being An Ally - . effectively working with gay, lesbian, bisexual or transgender students presented by todd wolfe at

Being an Effective Board - . presented by the nonprofit services division of 3fold communications. today’s discussion:.

BEING AN HR TRANSFOMER - . http://www.youtube.com/watch?v=bmhlulbwm74. agenda . personnel vs. hr transforming as a hr

Being an Authentic Christian - . why did paul write to the ephesians?. let them know how he was doing in prison (6:22)

Being an international student - . pippa whitton and andy holbrook into university of exeter. foundation → meeting

Being an Enthusiastic Church - . “what does it mean to be an “enthusiastic church?” en-theos = “in-god” or