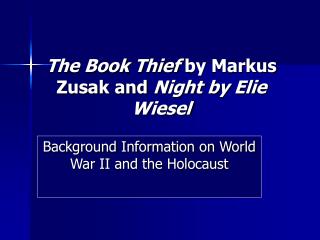 The Book Thief by Markus Zusak and Night by Elie Wiesel

The Book Thief by Markus Zusak and Night by Elie Wiesel

Historical Background for night by Elie Wiesel - . english 9, parson. world war ii. at the beginning. at the end.

Alejandra Membreno Period 2 Night  Elie Wiesel  Memoir - . irony -“i learned after the war the fate of those who

Night By: Elie Wiesel - By nick tate. night by: elie wiesel. sight-home. “ the jews of budapest live in an atmosphere

Book Banning And Controversy Over Huck Finn - . by jack mcguire. the controversy . huck finn has always been a book that

Night - timeline - . pick out 20 significant incidents (events) in the book c onstruct a time line with the incidents.

Night of the Pomegranate - . vocabulary. vigil. a watch kept during normal sleeping hours. the act or a period of

What causes day and night? - An imaginary line that passes through earth’s poles is called its axis. earth’s axis is

How to Get the Most Out of this Book - . develop a desire to master the principles read each chapter twice stop and ask

Night Questions - . chapter 1. 1. describe moshe' the beadle. 2. name the other children in elie wiesel's family below.

Night by Elie Wiesel Theme: Silence - . marlee maraugha. “where is god now?” and i heard a voice within me answer

Elie Wiesel - . why do we read

History of the Book and Book Structures - . british literature i. april 22 , 2013 brittany fay. outline. •history of