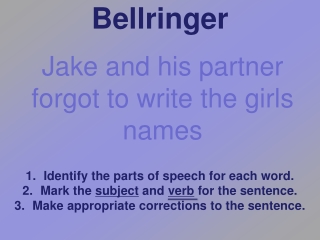 Bellringer. Jake and his partner forgot to write the girls names. Identify the parts of speech for each word. Mark the subject and verb for the sentence. Make appropriate corrections to the sentence. The Eight Parts of Speech Review. Types of Nouns