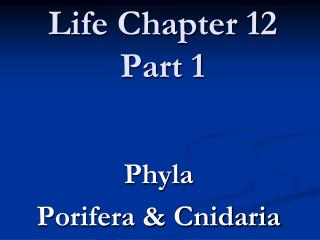 Chapter 12 Stoichiometry part 1 - . stoichiometry. the study of quantitative relationships between amounts of reactants

The Life of Christ (Part 1) Lesson 12 - . the sermon on the mount. 7 periods of the life of christ. years of preparation

Chapter 12, part A - Muscles about this chapter muscle types what muscles do how muscles contract contraction to

Chapter 12 Part 2 - . do now. how have discoveries in chemistry impacted people’s health and lives?. lesson 4 –

Chapter 12, part deux - Principles of sampling. randomizing helps ensure that the variation in our population is

Chapter 12, part B - . the eukaryotes: algae and protozoa. the three-domain system. eukarya. animals. fungi. origin of