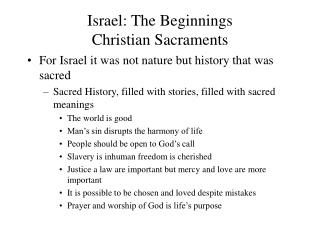 Israel: The Beginnings Christian Sacraments. For Israel it was not nature but history that was sacred Sacred History, filled with stories, filled with sacred meanings The world is good Man’s sin disrupts the harmony of life People should be open to God’s call

Holy Orders - . …..the real “men in black”. holy orders:. the sacrament through which a man is made a bishop,

The Sacraments of Initiation - . lay formation institute “celebration of the christian mystery” compiled from the

Christianity - . origins. started around 30 ad began in palestine (present day israel) based on the teachings and life of

Boardwork: Harmony - . ltms department of music. harmony. harmony is how sounds blend together. in music, we take the

Harmony is: - . the overall sound that happens when you play or sing more than one sound together at the same time. today

In the Sacraments - . the church meets the living god. part two the celebration of the christian mystery (ccc 234) ccc

The Church - . carrying on christ’s mission. the seed of the church. did jesus found a church to carry on his mission?

Chapter 4: Baptism - . goals: **this chapter explores the sacrament of baptism as one of the three sacraments of

Sacrament of Matrimony - . article 46. marriage. symbol of god’s covenant with his people. sign of christ’s love for

The Sacraments of the coptic orthodox church - . what is a sacrament?. the church sacrament is an invisible grace we

Christianity - . - judea (the holy lands) became under the rule of the roman empire and was ruled by roman governors like

The Sacrament of the Eucharist - . the holy eucharist completes christian