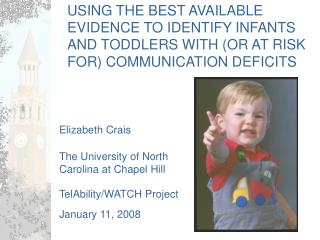 USING THE BEST AVAILABLE EVIDENCE TO IDENTIFY INFANTS AND TODDLERS WITH (OR AT RISK FOR) COMMUNICATION DEFICITS. Elizabeth Crais The University of North Carolina at Chapel Hill TelAbility/WATCH Project January 11, 2008. Where We Are Now?. Clear evidence that early intervention works

Supplemental Handout - . this supplemental handout is filled with frequently asked questions and answers to assist you

Topics in Development and Transition 2005 Handout No 6 - . nominal and real exchange rates this handout covers standard

To be used with handout - . plymouth rock. 1620. thanksgiving prayer. we come to this table today, o lord, humble and

Go to Exercise #5 on Class Handout #6: - . 5. in the “simple linear regression” section of the textbook, read the

External Features of the Rat - . this presentation is accompanied by a handout- “skinning your rat” as you identify

DO NOW: - . please take a handout from the front chair and your writing folder from the bin. only focus on the side of

Take a handout from the stool at the back; start to read - . arguing about technology. when this slide show ends, you are

Faye Griffin - Housekeeping. please turn off all cell phones.please hold your questions until the question and answer