Fortran 1957 – 2008 : A Language with a Past, Present and Future - PowerPoint PPT Presentation 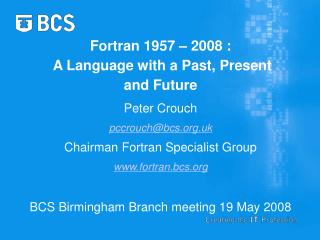 Introduction to Fortran - . jon johansson may 1, 2007. downloads. the talk and exercises are available from

The Future of the COBOL Programming Language - . karl schenk university of wisconsin-platteville department of computer

1964 Gene’s Comment – a true story - Past, present and future of earthquake analysis of structures by ed wilson draft