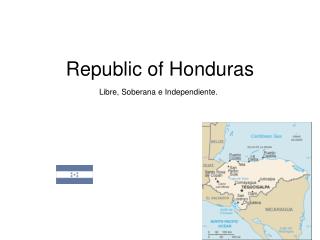 art OF Honduras - . benigno gomez. born in 1934 in naranjito , santa barbara . after studying in tegucigalpa, he

HONDURAS - . honduras is located in the american continent.

HONDURAS - . this is our reality …. one out of three honduran families do not own a house, not even land to build their

Honduras - . by: alma adame. population . about 7.99 million people live in honduras the growing rate is about 1.9

Honduras - . by cailey roberson, eric sutton, and ryan treadway. history of honduras. in 1576, the spaniards, in 1821

HONDURAS - . the location. departments and municipalities. honduras is divided into 18  departments . the capital city