Where do Cells Come From? - PowerPoint PPT Presentation 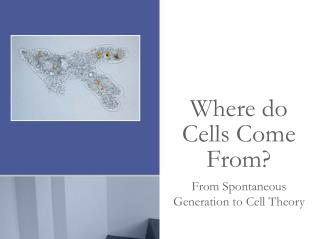 Where do Cells Come From?

Where do Cells Come From?

Cells! - . cell theory. is one of the major foundations of biology has 3 main components and 2 exceptions all living

Cells - . cell theory. all living things are composed of at least one cell. cells provide structure and function for

Where Do Cells Come From? - . “ all cells come from pre-existing cells ” -cell theory 3 types of cell divisions :

Where do Cells Come From? - . from spontaneous generation to cell theory - and back to abiogenesis. spontaneous

“ALL CELLS COME FROM PRE-EXISTING CELLS” - . cell division what are two different types of reproduction?. what must

Cells - . cell theory. all living organisms are composed of cells. they may be unicellular or multicellular . the cell is

Cells : The Basic Unit of Life - . essential questions what are cells made of? where do you find cells? why do cells look

Basic Structure of a Cell - . cell theory. all living things are made of cells cells are the basic unit of structure and

Cells - . discussion questions. what is a cell? where do cells come from? what activities are taking place inside a cell

Stem Cells - Use wicell.org main page and outreach for videos. stem cells. the biotech issue that may no longer be an

Cell Structure and Function - . cell discovery and theory. the cell. a cell is the basic unit of structure and function

Cells - . theory, types, organelles, and structure as related to function. theory . the wacky cell theory so, the cell

All organisms are made of cells - . cells conform to the definition of life. reproduce change with time highly organized.

The Cell Cycle - . where do cells come from?. the cell theory. all living things are made of cells cells are the basic