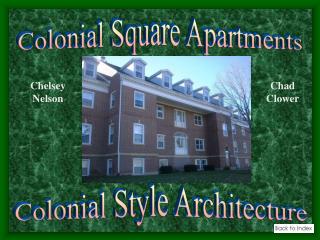 INCA STYLE ARCHITECTURE - . by hector e. mascorro. features of style. made out of blocks of stone uses gable roofs. machu

Colonial Government - . a need for reform list of grievances the situation in lower canada rebellion and reform.

Colonial Trades - . introduction. in colonial times there were no factories and everything had to be hand made. each

ARCHITECTURE IN HOUSES - . by noah. plank

Architectural Styles - . in mississauga. a note on style. this presentation is meant to showcase the architectural

Italian Language and Culture - . past and present. architecture. roman architectural idioms of arches, columns and domes