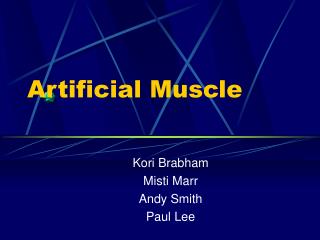 Artificial Muscle. Kori Brabham Misti Marr Andy Smith Paul Lee. Natural vs. Artificial Muscle. What does a natural muscle do? It is a contractile organ. It consists of fibers which “actuate” force and motion in response to nervous stimulation. How does it work?

MUSCLE - . m u s c l e. slow twitch muscles that are used for extended periods of activity, such as standing or walking,

Muscle - . chapter 17. movement. locomotion movement of animal from one location to another repositioning movement of

Muscle - . 2 / 20. movement with muscles. movement is one of the most prominent characteristics of animal life it can be