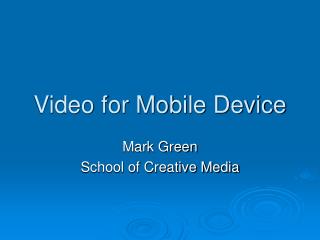 A device-driver for Video Memory - . introduction to basic principles of the pc’s graphics display. raster display

Mobile device security - . practical advice on how to keep your mobile device and the data on it safe. air, water,

Mobile Device Policy - . what is your policy? are new approaches being considered for device ownership (iru v. cru)?