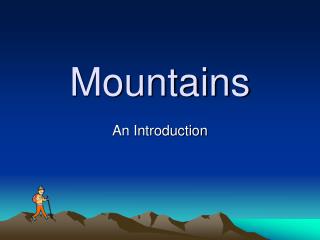 Mountains. An Introduction. What do you know ?. Write down anything that comes to mind when you think of the word ‘Mountain’ Have you ever visited or climbed one ? What sorts of things would you expect to see on a mountain ? Where are mountains ?. Let’s look at some mountains. Mountains!!! - . and all their brilliance…. cover 1/5 earth’s surface found on every continent and in all oceans

Mountains - Landscape characteristics earth’s landscapes are the results of the interaction of crustal materials,

Mountains - . spi 0507.8.2 explain how mountains affect weather and climate. . three ways. in this powerpoint you are

Mountains - . introduction…. mountain - a form of relief, raised above the plains with height difference (from a few

Mountains - . introduction…. mountain - a form of relief, raised above the plains with height difference (from a few

Mountains - . first, some interesting vocabulary. mountain. mountain – an individual chunk of rock or rocks of great

MOUNTAINS - . what are mountains?. mountains are parts of the landscape with steep slopes that rise 300 metres or

Mountains - Topic seven:. mountains. most mountains are large areas that have been uplifted due to the movement or

Mountains - . where do mountains come from?. mountains are formed when two plates within the earth’s crust crash