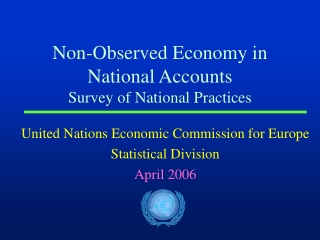 MEASUREMENT OF THE NON-OBSERVED ECONOMY: - . exhaustiveness adjustments in slovenia for the year 2002, using eurostat’s

‘National Economy’ - What do you think this term means? what have you read or heard about the national economy

System of National Accounts - . seminar on the implementation of the system of national accounts 2008 for caribbean