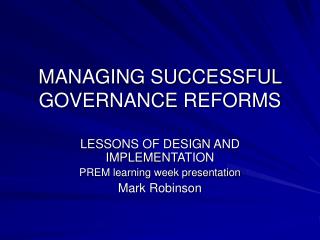 Learning from Reforms of National Education Systems - This presentation, on december 7 th 2010, set out some central

Democracy, “Good Governance” and (Sustainable) Development - The challenge of matching governing form to

Governance of Compliance - A PRACTITIONER’S VIEW - . risk and compliance working effectively together to address the

Innovations in Governance - . pradeep singh kharola. governance defined. the concept of &quot;governance&quot; is

The Future of Corporate Governance - . ccl 2012 henrik norinder. in which we consider the frontiers of corporate

Financial and economic education for better and more successful reforms - . elsa fornero (university of torino and