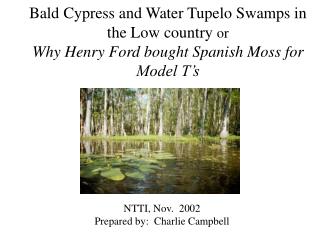 NTTI, Nov. 2002 Prepared by: Charlie Campbell - Bald cypress and water tupelo swamps in the low country or why henry ford

Swamps &amp; Marshes - . by: zach adams &amp; allie maples. what is a swamp or marsh?. a swamp is a wetland that

The Bald Man and the Fly - . a fly bit the bare head of a bald man who, endeavoring to destroy it, gave himself a heavy

Mangrove Swamps - . by: ethan heagy. this is a map of where mangrove swamps are. picture of f lorida everglades (mangrove

Water!! - . water!!. apes: chapter 12. in groups of 4:. what is the difference between: aquatic marine limnology