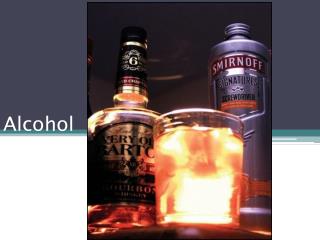 Alcohol Quick Quiz See how many of these questions you can answer “yes” to. Do you observe the law that prohibits people under age 21 from purchasing or possessing alcohol? Do you avoid riding with drivers who have been drinking? Do you say no to friends who pressure you to drink?

ALCOHOL - . intermediate 1 biology unit 1 – health and technology. introduction. a drug is a substance that alters the

Alcohol - . alcohol is a drug. this is the most commonly used and widely abused psychoactive drug in the world. been

Alcohol - . mr. read. bell ringer. when was the last time you saw alcohol in the media?. what is it??. ethanol – the

Alcohol - . alcohol. 2/3 of adult population drink many minors also drink, which is illegal average age for children to

Alcohol - . it affects you and others . choices. definition of choices: “an act of selecting or making a decision when

Alcohol - . alcohol related accidents is the number one cause of death among teenagers!. alcohol. alcohol is considered a

Alcohol - . is alcohol illegal or legal. alcohol is legal because you can buy them from supermarkets, liquor stores and

Alcohol - . all the details. what is alcohol?. a liquid, produced by the fermentation (aging) or distillation

Alcohol - . by pat and corey . introduction