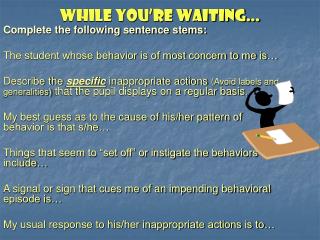 While You’re Waiting…. Complete the following sentence stems: The student whose behavior is of most concern to me is… Describe the specific inappropriate actions (Avoid labels and generalities) that the pupil displays on a regular basis.