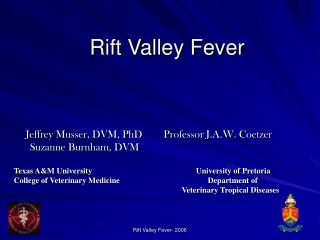 Africa’s Great Rift Valley - . this giant split in the landscape is the result of two tectonic plates separating. john

The Case study of Rift Valley Fever in Calcia Learning objectives - On completion of the exercise, participants will be

Block Mountain and Rift Valley - . when the land between two parallel faults is pushed up, a landform called a block