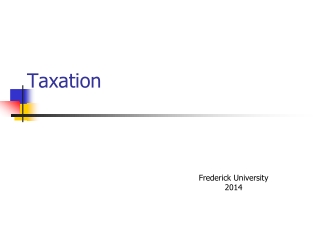 Taxation. Frederick University 2014. Taxation and Government. For government to provide goods and services such as national defense, social security, national parks, etc. it must have money. The Government raises money several ways including user fees and taxes.

TAXATION - . history of taxation importance of taxation to the taxpayers and to the government kinds and characteristics

Taxation - . by meg, claus, michelle and jeremy. gst. the goods and service tax (gst) is a broad –based tax of 10% on

Taxation - 1. how much money do you want to be earning (per year) when you are 30? 2. what percentage of your income do

Taxation - . taxation. ec/entrepreneurship. descriptive overview:. students will describe the most common types of

Taxation - . issues to consider how visible are they? how socially acceptable are they? progressive versus flat who pays?

Taxation - . taxation in australia. australia is a federation of states pre ww1 income tax was levied by the individual

Taxation - . the representation of people in and against power. lumber embargo. lumber

Taxation - A way for the government to pay for things we need like parks and sidewalks. a means by which governments

Taxation - . taxes. “in this world, nothing is certain but death and taxes.” – ben franklin “ taxation

Taxation - . chapter 4c. effects of taxation on economic welfare. how are consumers affected by taxes? how are producers