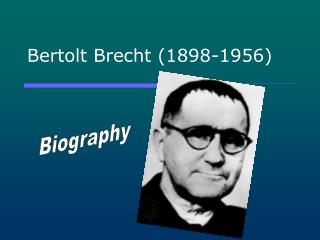 Bertolt Brecht - . 1898 - 1956. epic theatre and the principles of the berliner ensemble. important social and political

Bertolt Brecht - . and epic theatre. “actors should not impersonate, but should narrate the characteristics of a

BERTOLT BRECHT - How might his working methods be useful to a director?. bertolt brecht. chapters. the role of the

Mother Courage and Her Children Bertolot Brecht Costume Design – K. King - . this is a slate – it holds the name of

Bertolt Brecht - . playwright director theorist practitioner. “brecht’s work is the most significant and original in

Carrie Fisher: 1956-2016 - Carrie fisher, who rose to fame as princess leia in the "star wars" films and later

GILDED AGE - . a process for removing air pockets and impurities from iron, and thus allowed steel to be made. this made