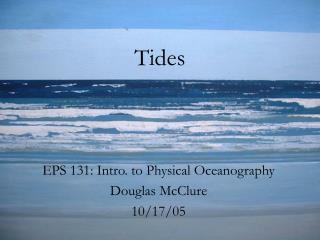 Tides. EPS 131: Intro. to Physical Oceanography Douglas McClure 10/17/05. Outline. Physical origin of tidal forces Global effects of tidal forces on Earth Over one day Over one lunar month Tides in Reality Outlook for the (distant) future. Origin of Tidal Forces.

TIDEs - . technology, innovation, and diversity in

TIDES - . tides. the periodic short term changes in the height (rise or fall) of the ocean surface at a particular place

Tides - . what are tides? why are there low and high tides each day?. tides. the tides are the rise and fall of sea

Tides - . tides. what are tides? the periodic rise and fall of the sea level under the gravitational pull of the

TIDES - . how tides relate to the gravitational pull and orbit of the moon. a tide is the rise and fall of the ocean’s

Tides - . cyclical rise and fall of the oceans in response to the forces exerted by the moon and sun. 3 april 2006 - 4

Tides - Tides are long waves that move through the oceans in response to the forces exerted by the moon and sun .