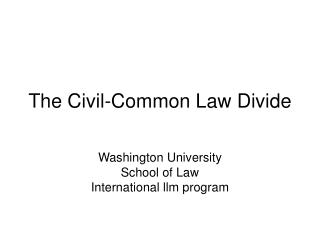 The Civil-Common Law Divide. Washington University School of Law International llm program. Introduction. Thank you for Invitation Questions for audience- How many of you have studied comparative law? For how many of you is this your first semester of study in US?

Civil Law - . eq: what is civil law?. v. v. lawsuits may encourage business to protect employees – but not always.

Civil Law - . two kinds of civil cases. negligence suit- filed when someone’s carelessness is the reason for another

Civil Law : - Moral – duty of care, morally acceptable for an organisation to seek to reduce accidents and injuries.