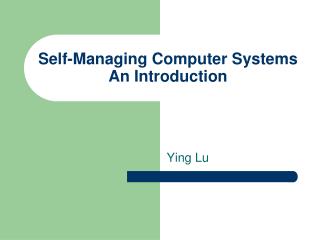 Self-Managing Computer Systems An Introduction. Ying Lu. Give Credits. Most slides are from Mark Jelasity, University of Bologna, Italy I have modified them and added new slides. Outline. Background Historical perspective Current state of IT What do we need? Desired self-* properties

Self-Managing Computer Systems An Introduction - . ying lu. giving credit where it is due:. most slides are from mark

Managing Self - . story of my life. you have just been given a contract to write your autobiography for a major