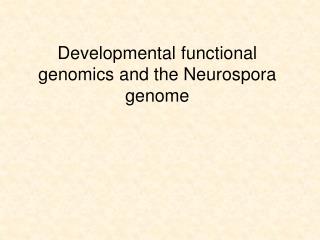 Developmental functional genomics and the Neurospora genome. Outline methods to gind genome-wide maps of develomental processes. What to do after the genome is done? What data do you need? What models do you need to be able to build?. First.

Functional genomics - . practice. real-time pcr i. pair the bands (2-6 on the gel) with the melting curves!. real-time

Functional Genomics – Why? - . you can’t learn everything from dna sequence levels of organization contain different

Microbial Functional Genomics - Chapter 1. genomics: toward a genome-level understanding of the structure, functions, and