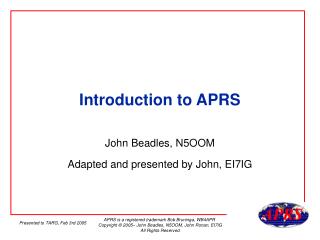 Introduction to APRS. John Beadles, N5OOM Adapted and presented by John, EI7IG. Expectations for this presentation. This presentation will tell you (briefly) what APRS is and what you can do with it

APRS and Weather - . glenn frasier, kd5dmg. aprswxnet/cwop: a beneficial partnership of noaa, amateur radio, and other

Introduction to Packet Radio - . by matt mitchell kb8uvn. who am i?. matt mitchell, kb8uvn licensed since 1994 active on