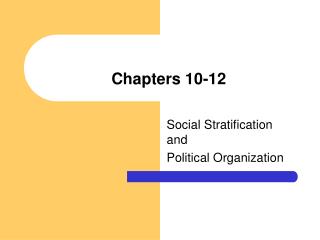 Chapters 10, 11, and 12 - . rachel mccabe. http://scaleofuniverse.com/ just a quick app because we were talking about

The Outsiders Chapters 10 -12 - . read the poem by robert frost that pony recited to johnny when they were hiding out in

RACE questions for chapters 10-12 - . why was johnny's dying so difficult for dally to handle? chapter 10 who comes to

Unit 5 – Chapters 10 and 12 - . what happens if we don’t know the values of population parameters like and ? can we

Chapters 10 - . deploying and processing. deploying send your definitions to the analysis services processing perform the

Chapters 9-12 - . things fall apart. get into groups of 3 and summarize chapters 9-10 and answer the following questions

Chapters 11, 12 - . stationary perturbation theory and its applications. 11.a.1. the eigenproblem let us assume that

CHAPTERS 12-14 - . why will scout be unable to see dill this summer? why do jem and scout go to church with cal? why