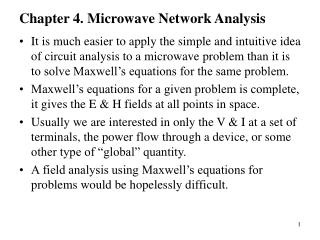 Chapter 4. Microwave Network Analysis. It is much easier to apply the simple and intuitive idea of circuit analysis to a microwave problem than it is to solve Maxwell’s equations for the same problem.

Chapter 11 - . network organization and architecture. chapter 11 objectives. become familiar with the fundamentals of