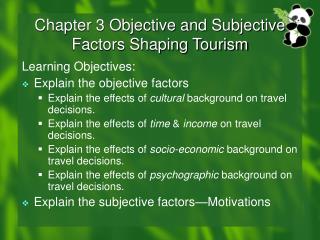 Careers in the Tourism and Hospitality Industry - Tourism professionals: a breakthrough in the careers and trends of the

Chapter 5 Staying Active and Managing Your Weight - . part 1 the importance of food. objective. identify factors that

Traffic Shaping and Policing - . objectives. upon completing this module, you will be able to: describe and configure

PSYCHOLOGICAL FACTORS - . the psychological factors are the more subjective ones to evaluate because each person

GCSE Leisure and Tourism - . introduction to leisure and tourism unit 2. n.b. your macro security will have to be set to