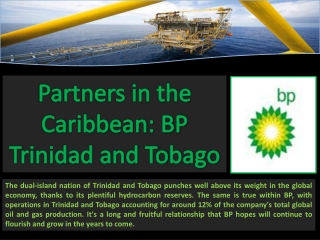 http://www.bp.com/extendedsectiongenericarticle.do?categoryId=9044262&contentId=7077293 The dual-island nation of Trinidad and Tobago punches well above its weight in the global economy, thanks to its plentiful hydrocarbon reserves. The same is true within BP, with operations in Trinidad and Tobago accounting for around 12% of the company's total global oil and gas production. It's a long and fruitful relationship that BP hopes will continue to flourish and grow in the years to come. Five centuries ago, when explorers were sailing the globe in a bid to discover new lands, many passed through Caribbean waters on their way to the Americas. Among them was the British navigator, Sir Walter Raleigh, who – it is said – came across a ‘lake’ of asphalt on the south-western corner of Trinidad in the 1590s. Pitch Lake, as it is known today, is one of the world’s largest natural deposits of this sticky, black substance – created by deep deposits of oil that are forced to the surface, where the lighter elements of the hydrocarbon evaporate to leave behind the heavy asphalt. Adventurers such as Raleigh used the substance to seal their ships’ hulls, before continuing a voyage. These days, exploration in the region is not about ﬁnding new territory to mark on an atlas, but identifying further hydrocarbon deposits hinted at by the ones those early navigators ﬁrst came across. The expanse of dark viscous material that seeps up through the ground at Pitch Lake provides visual conﬁrmation of the rich natural resources that lie beneath these islands’ surface and off their coastlines. Trinidad and Tobago enjoyed its ﬁrst oil boom after 1910, although the abundant natural gas in its reservoirs was only fully appreciated several decades later. From the late 1970s, gas began to dominate the country’s energy market, as it does today. The dual-island nation produced more than 700,000 barrels of oil equivalent in natural gas on a daily basis in 2011, of which BP’s Trinidad and Tobago busin Our Joint Venture Partners, bp holdings barcelona - We seek to work in partnership with companies that share our

F.B.D HOLDINGS PLC - . lydia s. mccabe. introduction. the company i have done my research on is fbd holdings plc. they

Caribbean Catastrophes and the Market - . laurie a. johnson may 17, 2005. agenda. rms cat modeling in the caribbean 2004