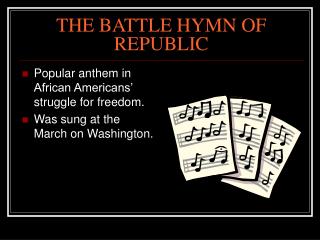 THE BATTLE HYMN OF REPUBLIC

THE BATTLE HYMN OF REPUBLIC. Popular anthem in African Americans’ struggle for freedom. Was sung at the March on Washington. CIVIL RIGHTS MOVEMENT. The Civil Rights Act of 1964 is one of the strongest civil rights laws in the history of the United States.

THE BATTLE HYMN OF REPUBLIC

1 Battle Hymn of the Republic

詩歌本 Hymn Songs #381 The Church’s One Foundation 教會唯一的根基 - . (1) the church’s one foundation

The Homer Award - . continuing the other noble tradition of the institute. the history. named in honour of homer simpson.

Battle Hymn Of The Republic - . mine eyes have seen the glory of the coming of the lord, he is trampling out the vintage

Battle Hymn of the Republic by Julia Ward Howe - . verse 1 mine eyes have seen the glory of the coming of the lord: he is

“Who is this Glory-King?” “It is the YWHY, armed and ready for battle, - The leader of heavens armies ywhy iz-zooz'

Allusions - . ms. lecount grade 9. allusions. definition: a reference in a literary work to a person, place, or thing in

BATTLE OF THE BRAINS - . what is battle of the brains?. a contest sponsored by burns &amp; mcdonnell and science city

Hymnology - . the music of the church. by archduke sean h. moss of chesterfield. old 100 th fairest lord jesus hark! the

Battle-Hymn of the Republic Julia Ward Howe Daegan Lappin - . mine eyes have seen the glory of the coming of the lord: he