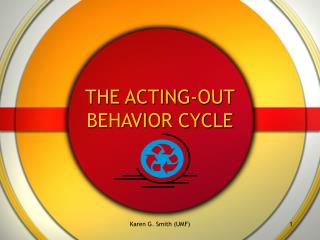 THE ACTING-OUT BEHAVIOR CYCLE. The purpose of this model is to provide a description of the successive phases in an escalating chain of acting-out behavior involving a teacher and antisocial students. Common Assumptions. Teachers need to be in CONTROL!

Managing the Cycle of Acting Out Behavior in the Classroom - . by geoff colvin. when acting out behavior occurs, we often

De-escalating the Acting-out individual - . what do you do? 1) you ask a individual if they need help, he pushes a chair,

Editing Out Unsustainable Behavior - . by: david simek. how do we edit out unsustainable behavior?. consumers can edit

Acting - . making us believe. types of actors. there are four kinds of actors extras- a face in the crowd nonprofessional

Acting - . ppt developed by jaq james. purpose of today’s class:. to help you easily engage in social conversation on