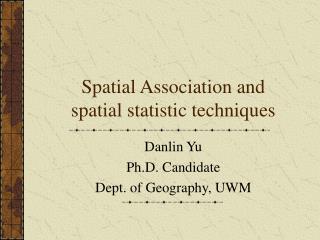 Restitution and Interpretation of Spatial Representations

Spatial Interpolation - . inverse distance weighting the variogram kriging much thanks to bill harper for his insights in

Spatial Exploration with Pentominoes - . by mrs philbin. what are pentominoes?. pentominoes are shapes made by joining 5

Spatial Diffusion of Disease - . diffuse is defined as ‘to disperse or be dispersed from a centre; to spread widely,

Spatial Autocorrelation: The Single Most Important Concept in Geography and GIS! Introduction to Concepts - . .