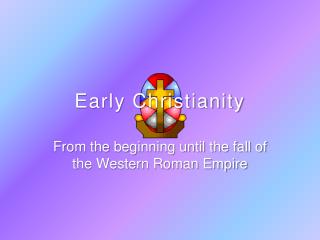 Early Christianity. From the beginning until the fall of the Western Roman Empire. EARLY CHRISTIANITY. Roots lie in Judaism, the teachings of John the Baptist, Jesus,and the apostles Earliest converts were Jews who did not think they were breaking away from Hebrew Law

Competing Claims Should I believe something other than Christianity? - . origin of

Christianity Under the Siege of Neopaganism - . america is the last bastion of christianity in the world today, where

Why do you think Christianity spread despite the fact that early Christians were often persecuted?